Japan Expo has been my top convention to go to for seven years now. It was my first con ever, and surely my biggest geek experience – but with years passing by, you could think that my interest in this gathering might lessen… Well, Japan Expo is still my very own Christmas that takes place in the middle of each summer.

I guess that everyone lives the Japan Expo experience in their own way, depending on how many times you’ve already been there, your motivations, your expectations, or even whether you’re attending alone or as a group. And every year it’s different!

END_OF_DOCUMENT_TOKEN_TO_BE_REPLACED

Happy Saint Valentine’s Day everyone; may you find the droid you are looking for! ^^

Today, instead of making some cheesy content as there are already tons of out there, it seems like an excellent opportunity to talk about love in the world of MMORPGs. Through several years of gaming, I noticed a bunch of different types of the love’s appearance and, of course, different points of view, and I would like to share them with you!

The big old classic in MMORPGs is simply to play the love messenger with some easy quests, such as A is secretly in love with B but has no guts to say it. That’s generally our cue to bring some flowers, a love letter, kill some savage creatures threatening B’s family/village/spaceship and let finally the two lost souls have a lifetime of hapiness together.

One of my favorite examples can be found playing the Lord of the Rings Online.

The first one is a series of quests during the spring festival at Bree, where we try to help by delivering some splendid tokens of affection (very classic flowers, chocolate box and so on), but we even end up by leaving them at the wrong adress and there’s a lot of fun involved.

And of course, let’s not forget the beautiful albeit sad love story of Elessar and Undomiel of which we learn more details by asking several Elves in the Lothlorien region, all while listening to heartwarming elvish music and being surrounded by the natural paradise of  the Golden Wood…

Role n°2: being involved with another character

Less common than the first one, a series of quests or the role playing pattern makes our character involved with an NPC (non-playing character) or a companion. I am a huge fan of this type of love episodes in the game; it’s like having a mini romantic movie inside something completely different.

In order to illustrate this, I cannot think of a better example than Star Wars the Old Republic and its companions system. Either you choose the Republic or the Empire, using the Force or blasters, you always have several companions at your side, and some of them may engage a romantic relationship depending on what you do. Your actions in the game, as well as gifts you might offer them or answering in a special manner during conversations with them should bring you closer.

My favorite love stories from SWTOR are definitely with Malavai Quinn (Sith Warrior), and most of all with Corso Riggs (Smuggler). The moment the latter and my smuggler kissed and decied to get married was so cute! Even after you’ve finished your companion’s quests, he still sends you love letters and gifts through ingame mail. Now how sweet is that?

The name « MMORPG » kinda has « massively multiplayer » written in it, no surprise that you can actually bond with humans thanks to this type of gaming. For some, this could be a real opportunity to meet someone, even fall in love and bring this great new relationship beyond the virtual world. For others, playing MMORPGs will simply mean meeting new people through guilds, raid rosters and whatnot, and why not making new friends.

Some MMORPGs have in-game relationship systems. The most common is to marry another character, giving special bonus like an extra teleportation or combat enhacements.

Runes of Magic had (don’t know if it’s still the case, I played RoM a long while ago) a rather extended version of relationships that you mave have with other players. There was of course the marriage system, but you could also become a family member or a friend. Each of those relationships could be leveled-up by playing together, and you could gain different bonuses such as more HP, mana, attack of defence. All the more reasons to play with lots of people, I liked it a lot.

However, my favorite in-game marriage ever remains the one I did with my boyfriend when we were both playing Final Fantasy XIV. Not only you have to accomplish together a series of special quests preparing you for the ceremony, but also you can plan the whole wedding to the smallest details, such as decoration or music. The wedding ceremony is just lovely; there are adorable cinematics, the rings exchange, the final kiss… And to be honest, the wedding gown is just gorgeous.

What about your favorite love episodes in the MMORPG world? Do you like to enjoy some player relationships or you rather leave all that stuff aside from the « real » gaming? Or maybe you’ve witnessed another role a player could have in romantic scenarios in this type of games? Tell us all about it!

We’re kicking off 2016 with a new edition of the monthly 6 on 6 challenge! I was happy with January’s color theme; turned out I had lots of ideas and I have to say that I am quite satisfied with my photos. If you want to know more about the challenge, you can find a description in my first 6 on 6 post here. Now, without further ado, I give you my geeky white selection! 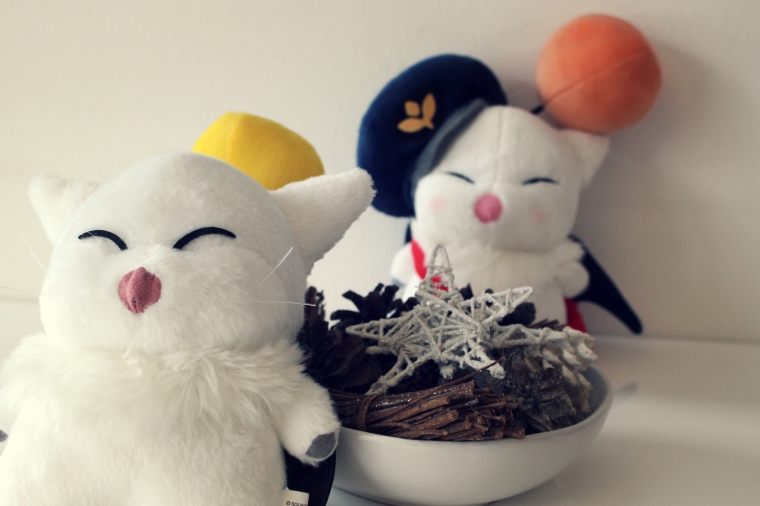 Me and my boyfriend loved playing FFXIV. An awesome MMORPG where one of the cutest creatures are Moogles (kupo!). There is a rumor that seeing a Moogle brings luck. Well, we have two of them sitting in our living room ^^

All-white cosplay from one of my favorite shônen: Kunieda Aoi in Beelzebub! Even though the cosplay wasn’t the most difficult to pull off, I was very proud of it in front of Beelzebub’s author Tamura Ryûhei. He actually said to me that he was « honored to meet miss Kunieda in person » and his editor took a bunch of pictures of me to show back in the offices in Japan. I was thrilled to meet Tamura-sensei and the fact that I could have a real and comprehensive conversation fully in Japanese with this incredibly talented mangaka was definitely one of my greatest geeky experiences ever. 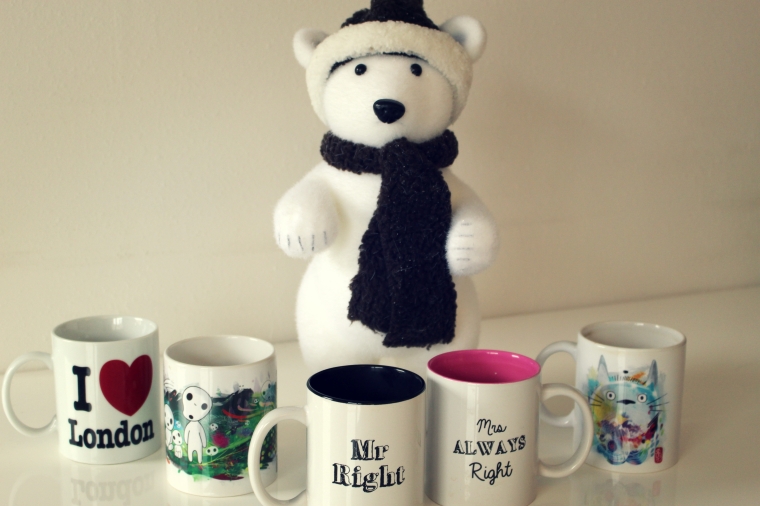 I am a huge fan of tea and coffee. And what better is there than enjoying a delicious beverage in a geeky mug? Especially when you have a lightsabre spoon to give it the right finishing touch…

An awful impulse purchase that turned out to be one of the best nerdy things I own now. Soft like Bulle’s fur, big enough to roll myself in it while watching a movie or reading a book… it even has a sewn-in pillow which makes it even more comfortable. Besides, there’s a girly panda involved so it’s just cute.

Last Monday I received a surprise letter from Anne Lee at Chic Pixel. That beautiful card with a heart-warming message and the super cute stationery made my day. And my new datebook is now filled with kawaii stickers and cards, thank you so much Anne Lee for this lovely gesture!

To me, a top of mind answer to the white color is snow. Tons of it. The picture above is in my opinion one of the best I have ever took. No filter, no correction, no nothing. Beautiful nature in the French Alps and a random tiny little house. I think that I love this picture so much because it shows perfectly the mood of that place; total peace and quiet, breath-taking landscapes, and the memory of walking there hand in hand with the person that I love. Pure hapiness. But hey, if you don’t think it’s geeky enough to be featured at the 6 on 6 challenge, I prepared a counter proposal with this one below:

I hope that you enjoyed my interpretation of the white challenge. What about your geeky white stuff? Tell me all about it! Happy blogging 🙂